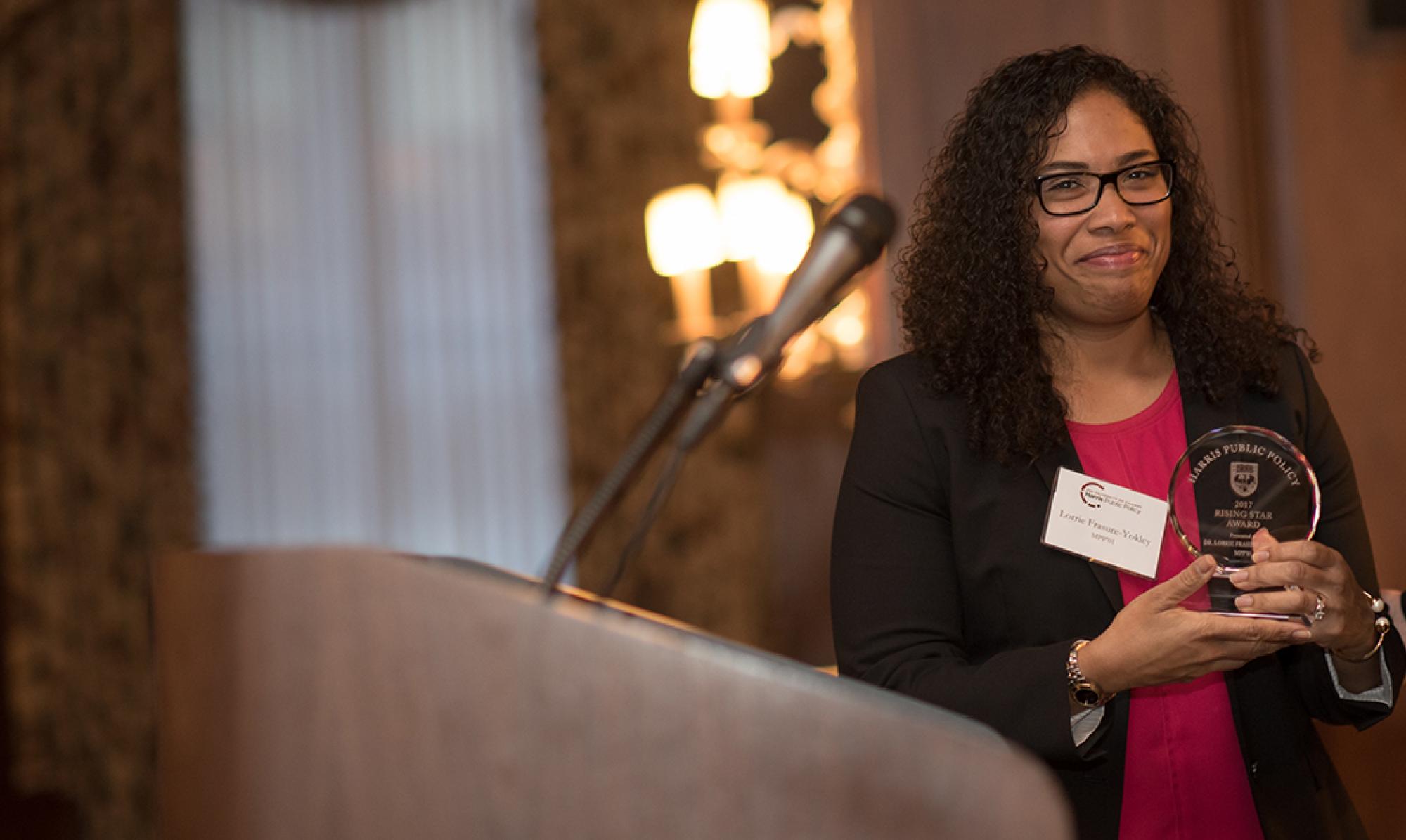 Congressman for Illinois, Mike Quigley, AM’85, remembers feeling “a little overwhelmed” when he first arrived at the University of Chicago Harris School of Public Policy but that the “arsenal of skills” he picked up at Harris has been an asset ever since.

In June, Harris Public Policy recognized U.S. Congressman Quigley and two other outstanding Harris alumni for their achievements as part of Alumni Weekend 2017, a weekend of reconnections with former classmates; sneak peeks tours of our future house, the Keller Center; and a celebration of our alumni’s achievements.

“To be honored by the program you were so intimidated by is a thrill,” Quigley said about being chosen for the Career Achievement Award. “When you say, ‘I went to the University of Chicago,’ it has an amazing reputation. It’s helped market me.”

For Quigley and the two other honorees, Lorrie Frasure-Yokley, MPP ’01, and Monica E. Horton, MPP’01, Harris Public Policy provided inspiration to change the world, a rigorous education in policy analysis, statistics and economics, a great network of friends and colleagues and a status and reputation that rubbed off and helped fuel their success.

Frasure-Yokley, who received the Rising Star Award, has taken a decidedly different path from Quigley as associate professor of political science at UCLA, where she wrote the National Book Award-winning “Racial and Ethnic Politics in American Suburbs” (Cambridge University Press, 2015). But she sounds similar notes about Harris.

“The school gave me tools that were needed to pursue a PhD program in political science, basic skills related to statistics and econometrics,” said Frasure-Yokley, who attended Harris as a Public Policy in International Affairs (PPIA) Fellow. “I’m honored and surprised because I’m in academia, and not necessarily saving the world in the way I envisioned.”

Monica Horton, MPP’01, the recipient of the Minorities in Public Policy’s (MiPPS) 15th Anniversary Alumni Award, is director of practice management at the American Society of Retina Specialist (ASRS) and helped co-found MiPPS a decade a half ago.

“To see how MIPPS has just grown and taken root and really become part of Harris has been so amazing to me,” she said. “I'm just so excited and so proud for the students to actually have an organization that they feel is something that they want to continue. That's been so rewarding for me, and I'm flattered to be recognized as a distinguished alumni for MiPPS this year.”

Quigley served as a staffer for then-44th Ward Alderman Bernie Hansen while attending Harris, which he said proved to be synergistic experiences. “The combination was perfect for me,” he said. “I’ve always said that policy only matters when it works effectively at the local level. A food program, however brilliantly construed, has to be implemented.”

After a stint as a criminal defense attorney for nearly a decade upon subsequently completing law school, Quigley entered public office as a Cook County Commissioner, where he focused on issues like inequality in the justice system, marriage equality, governmental transparency and public sector efficiency and effectiveness, the latter as a leader of the so-called reform movement that produced regular “reinventing government” reports.

Quigley cites the Affordable Care Act and measures to promote accountability and transparency as high-water marks during his tenure in Congress, and in the future he would like to be involved in passing legislation to deal with immigration reform, climate change and marriage equality, but he knows those are unlikely to pass until the Democrats retake the House majority. “We’re playing defense,” he said. “It’s maddeningly frustrating.”

Going to Harris has enabled him to more nimbly take on a wide variety of policy issues as a congressman, from trade policy to healthcare policy to climate change, Quigley said. “Congress has people specialized in a few issues,” he said. “There’s nothing I’m afraid of. I got into this business thinking you can save the world. And I tell young people today, ‘Don't let anyone tell you, you can’t. In fact, you have a moral responsibility.’”

The first woman of color to achieve tenure in political science at UCLA, Frasure-Yokley has pursued the goal of saving the world in a different but no less real way than she originally had envisioned. The first-generation college graduate from the South Side of Chicago had never set foot on the University of Chicago campus before she applied to Harris.

“It’s a different world from where I grew up,” she said.

“The intellectual environment, it was a place where I could thrive and really think through, ‘What are my goals here? What kinds of populations do I want to study and examine?’”

Given her background, Frasure-Yokley was drawn to studying the African-American population starting during her Harris days, when she wrote her master’s thesis on nonprofit agencies providing community services in nearby Woodlawn. “The changing demographics in suburbia came along much later as a focal point,” she said.

But her Harris experience gave her a blend of quantitative and qualitative strengths as well as experience in mixed-method research that included data as well as focus groups and interviews to provide flavor. Those blends informed not only her book but more recent work that’s examining the political behaviors and attitudes of different racial and ethnic groups at the national level during the 2016 election.

Provided in five languages to 10,000 people, the survey brought together a cooperative of 86 scholars at 55 institutions to formulate questions. “I’m pretty excited. It’s pioneering in a lot of ways,” Frasure-Yokley said of the project.

“Those tools were first cultivated at Harris,” she added. “The ability to move within these different methodological approaches to ask, ‘What’s the best approach to examining the questions of our time?’”

Horton has spent the past 16 years advocating for health policy and health education. Her expertise in health policy analysis, including Medicare, Medicaid, and private payer proposals, has resulted in significant changes that positively impact the medical community.

She is please with the career she has build so far, based on a passion fostered during her time at Harris. “I didn't know what my career would look like when I left Harris, but I knew that I would be making a difference in health care.”

As the director of practice management at ASRS, she advocates for board certified ophthalmologists to ensure that they are positioned to deliver optimal care to their patients. She said that learning to write policy briefs at Harris was hugely important to her career.

“Really being able to condense down important information in a short paper has been really helpful,” she said. “In my career, I often need to quickly summarize the issue and give the pros and cons. That experience of being on the spot, having all that practice at Harris, really helped me be successful.”

Policy briefs were not the only important aspect of Harris for Horton. Also key was the strong network of friends and colleagues that she developed that are still an important part of her life.

“It makes me really happy to think about my experience here, because the people that I met my first day of classes are the people that I'm still continuing to rely on for support and encouragement, and I really value that about Harris.” 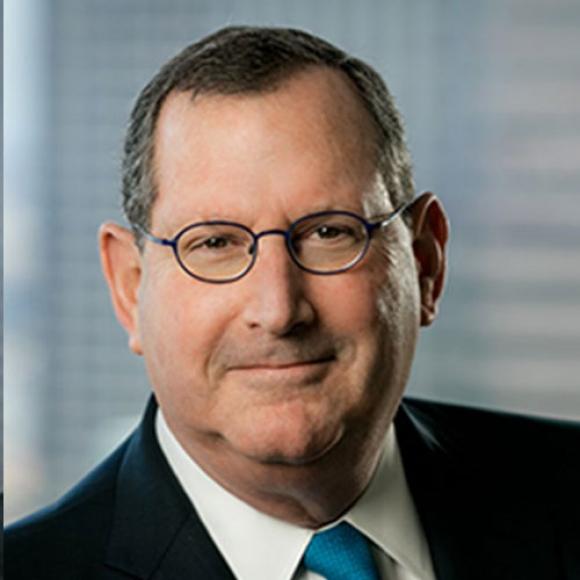