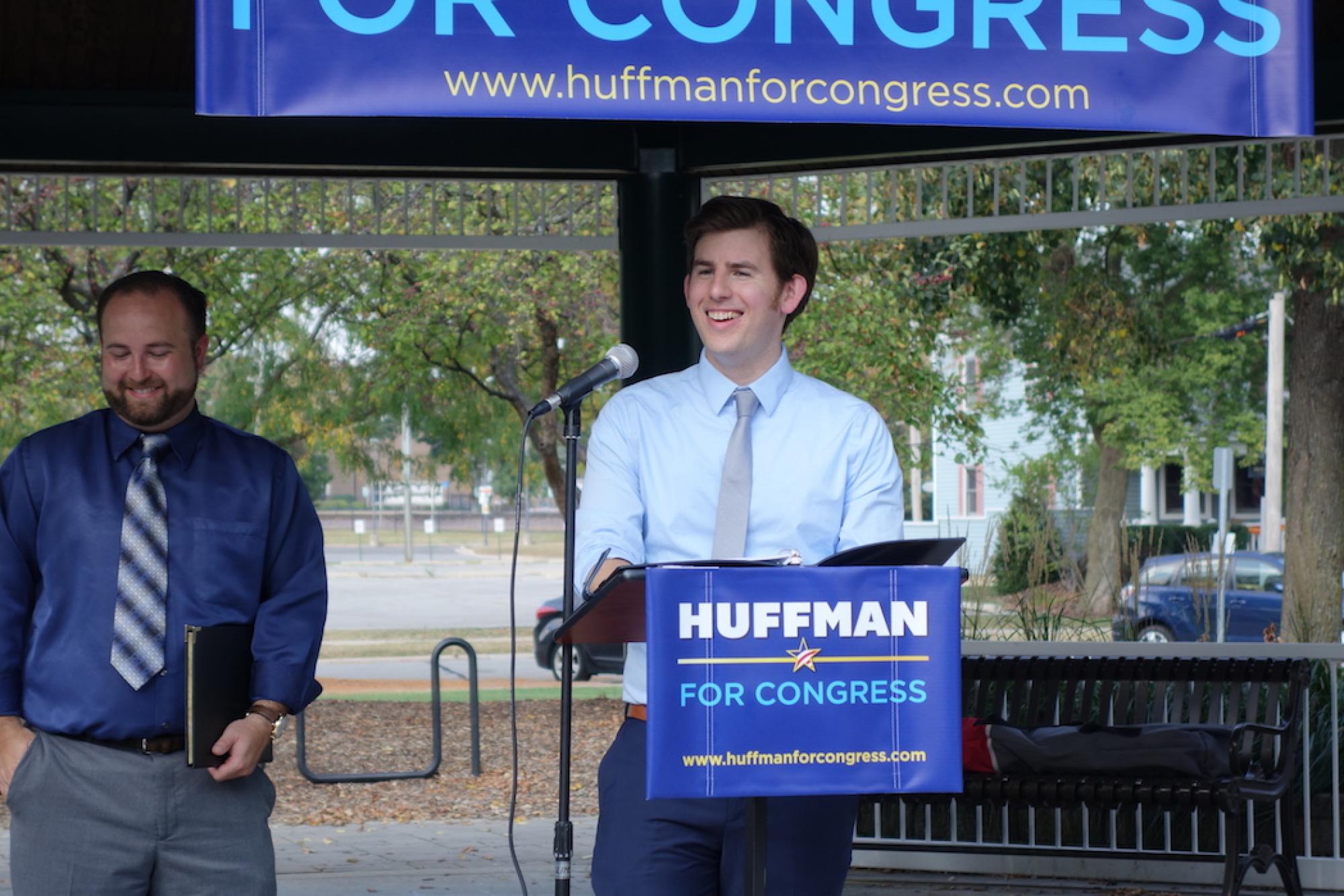 On September 7, 2017, Ryan Huffman MPP’15 found himself doing something that he wouldn’t have expected even a year earlier. He announced that he was throwing his hat in the ring for Congress, running as a Democrat for Illinois’ 6th District, a seat currently held by Peter Roskam (R-Wheaton).

A 31-year-old data analyst who graduated with honors from the University of Chicago Harris School of Public Policy, Huffman was spurred to action by the election of Donald Trump to the presidency – an eventuality that he, like many political observers, didn’t foresee. “It didn’t even cross my mind until after Trump was inaugurated,” Huffman says. “Until that, it was just, ‘Here I am, trying to pay my bills.’”

Young, with no infrastructure and no political contacts, Huffman came to the race with what he saw as a secret weapon: his education at Harris Public Policy.

Huffman had come to Harris impressed to what he called its “logical, analytical approach” to policymaking.

“I liked that they emphasized the analytical side of policy – the quantitative side,” Huffman said. “How do you decide what policy is working?”

Huffman thinks that his tell-it-like-it-is style helps him on the campaign trail. “We’ve been hearing the talking points for years, what’s actually working here? Let’s try to take the emotion and rhetoric out of it.”

In 2014 and 2015, while a student at Harris, Ryan Huffman took a three-course sequence to get a certificate in political campaigns. The course was, for Huffman, a return to an earlier life.

A native of Elgin, Illinois, Huffman first became engaged in political campaigns in 2008, when he did digital media work as a part of his home-state Senator Barack Obama’s campaign for the presidency. Though brief, Huffman remembers the experience as “by far the best experience of my life to that point, accomplishing such an amazing thing” as electing a new president.

Though his undergraduate degree was in journalism, the 2008 campaign had Huffman hooked on campaigns and the possibilities that came from serving the public. “I really caught the bug there,” Huffman says, “and was inspired to do it by President Obama.”

In 2009, Huffman landed a White House internship, and was assigned to work alongside the Council on Environmental Quality. At the time, the Obama administration was pushing hard for the American Clean Energy and Security Act, which would have created a cap-and-trade system to limit – and over time, decrease – the amount of carbon dioxide released into the atmosphere.

It was a major priority for the White House, and the bill passed the House of Representatives on June 26, 2009. As the bill went on to the Senate, Huffman worked to track what senators were saying they would support.

“I wasn’t talking to Senators personally,” Huffman says. “Even being the lowest man on the totem pole, working for something I really believed in was something that was very important to me.”

Out of graduate school and working as a data analyst, Huffman announced his campaign without big money or formal political infrastructure. Instead, he says his goal is to implement Harris’ “logical, analytical approach” to his campaign, just as he would in office.

It was in his final year that he took the three-course sequence in political campaigns, including Anthony Fowler’s course “The Science of Political Campaigns.” Now that he is running a campaign himself, Huffman says Fowler’s class has been essential to figuring out how to run for office effectively and efficiently.

Using what he learned in Fowler’s course, he’s created what he calls a “Moneyball-style campaign.” Popularized by the Michael Lewis book Moneyball, the term refers to the Oakland Athletics’ analytical, metrics-based effort to build a successful baseball team despite limited financial resources – a successful venture that changed how baseball teams made decisions.

In the political sphere, that means putting the focus not on money, but on in-person outreach. “Volunteer outreach is one of the biggest areas of leakage and inefficiency in a campaign, when you have volunteers and you don’t connect with them when they’re most excited.” If a campaign is able to get volunteers who are excited by the cause and feel fulfilled in the tasks they’re doing, the theory goes, the volunteers’ in-person outreach can make a much greater impact in the community than expensive television ads or mailers, the traditional marketing-based campaign efforts.

He needs to focus on running an efficient, low-cost campaign because he’s made campaign finance reform a major plank of his platform, and he’s holding himself to a tougher standard by limiting who can donate money to his campaign.

“I’m not taking corporate money or special interest money. All of my money has to come from the grassroots. I don’t like the idea that our candidates are expected to spend hours and hours a day on the phone with wealthy people begging them for money.” A Democrat himself, Huffman adds, “Democrats have been a little too eager to take money from the big special interests, big corporations, and billionaires.”

If he wins the crowded Democratic primary on March 20, he will ultimately go head-to-head with Roskam, who has won every recent election by large margins.

Huffman believes that the influence of an individual voter is at an all-time low, but he thinks there is hope for him to prevail as long as people hear his message – with its focus on reforming campaign finance, addressing climate change, and reforming the student loan system – and feel that their vote will actually matter. “It might seem like a real longshot, but it can happen.”

Of one thing, Huffman is quite certain: “I’m having to run this campaign without any paid staff, and the only reason I believe I’m able to do that is because I learned so much at Harris. This campaign would not be happening without this Harris background.” 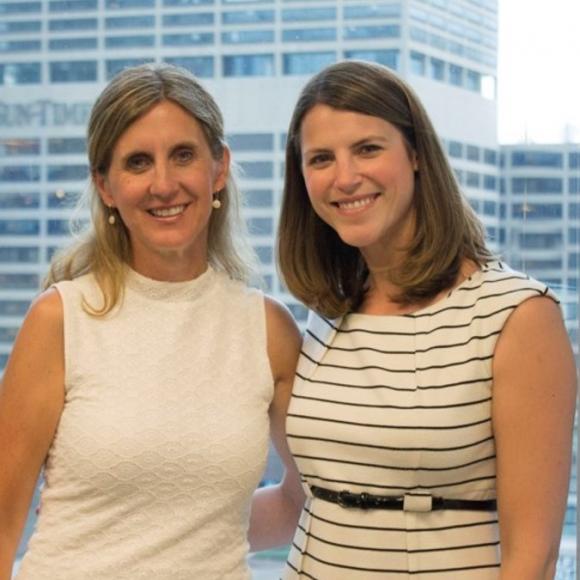 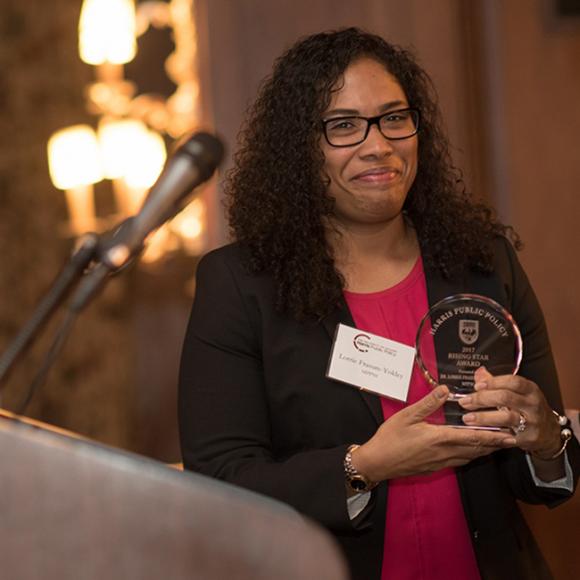