The University of Chicago's sixth professional school, Harris emerged in 1988 from an interdepartmental Committee on Public Policy Studies.  With its origins dating back to 1975, the committee envisioned an interdisciplinary master’s-level program that focused on the use of science and analysis to better understand public life and effect public policy change.

UChicago President Robert J. Zimmer has said that Harris "embodies many of the values that make the University of Chicago distinct." He continued:

"The school’s interdisciplinary and data-driven approach to policy analysis reflects the University’s culture of rigorous inquiry, and faculty and student engagement with the City of Chicago and other urban centers demonstrates the impact of research on societal challenges in education, crime, energy, and other fields. These efforts draw scholars and practitioners to campus to exchange ideas and learn.”

Starting with just five PhD students and 36 master’s students, Harris today represents the second-largest master's degree program at the University of Chicago. We offer a full range of undergraduate, graduate, and executive education programs ranging from our flagship Master's in Public Policy to innovative programs like our Master's in Computational Analysis and Public Policy, and more.

Guided by our exacting perspective, Harris is empowering a new generation of data-driven policy leaders, helping them turn their passion for doing good into positive social impact across all sectors.

Part of University of Chicago Tradition

The University of Chicago, one of the world's preeminent research universities, is home to internationally renowned scholars, researchers, and intellectual pioneers. In the last century, the University produced nearly 90 Nobel laureates in fields of study that include medicine, economics, and physics—including six current faculty members.

Founded in 1890 with a gift from John D. Rockefeller, the University embodies the vision of its first president, William Rainey Harper, a pioneer in education who believed in the strengths of an institution that blends an American-style liberal arts college and a German-style graduate research institute.

Harper articulated his hope and vision for the University at the very first faculty meeting in 1892, saying, “The question before us is how to become one in spirit, not necessarily in opinion.”

Located in Chicago's Hyde Park community, the University of Chicago is just seven miles from the heart of the city on Lake Michigan's south shore. In addition to being the home of Barack Obama, the 44th president of the United States, Hyde Park is known for its excellent bookstores, variety of restaurants and cultural events, and celebrated architectural landmarks, museums, and parks. From campus, you can easily access downtown Chicago and other city neighborhoods by car or public transportation.

Chicago is an education in itself. It is the birthplace of community organizing and a center of international finance and trade. It is also home to numerous national and international foundations, policy research centers, government agencies, nonprofit organizations, and businesses.

In the Loop, the heart of downtown Chicago, key decisions are made affecting the welfare and economic health of people worldwide. One of the world's great cities, with a world-renowned symphony and arts community, a spectacular waterfront, a rich architectural heritage, and an unparalleled selection of restaurants and vibrant neighborhood culture, Chicago is a dynamic training ground for public policy. It is a blend of big city and small town, tradition and innovation, history and progress. Chicago offers you endless options for discovery.

Six faculty members submit a memo, “Proposal for the Establishment of a Committee on Public Policy,” to University of Chicago President Edward Levi.

UChicago forms the Committee on Public Policy Studies (CPPS), which boasts leading faculty from across the University.

The committee, housed in Wieboldt Hall, develops a curriculum to equip public policy students with research skills and critical thinking.

The committee receives a $300,000 grant from the Ford Foundation, and considers offering a doctoral program to holders of a master’s degree in policy.

As the committee reaches its tenth anniversary, a group of five University leaders forms to create a report on its future.

The Council of the University Senate unanimously recommends that the University establish a professional "Graduate School of Public Policy Studies." The University Board of Trustees votes in favor as well, and begins the search for a dean.

Students found Chicago Policy Review, a journal which aims to bridge the gap between research and the real world.

The first students enroll in the Master of Science in Environmental Science and Policy (MSESP) degree program.

The McCormick Tribune Foundation gives a $5 million grant to Harris Public Policy to further its mission to develop excellence in urban and community leadership.

Harris admits the first class of students to the new Master of Science in Computational Analysis and Public Policy (MSCAPP).

The Pearson Family Foundation donates $100 million to Harris Public Policy to create The Pearson Institute for the Study and Resolution of Global Conflicts and The Pearson Global Forum. The landmark gift is equal in size to the second-largest gift in the University’s history.

Renovations begin on the facility at 1307 East 60th Street, the future Keller Center and home of Harris Public Policy. The renovated building, which will include adaptable spaces for hosting international conferences, lectures, and public events, is projected to open its doors in fall 2018. 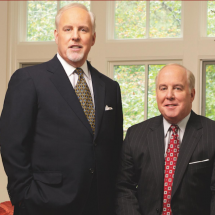 Strong family values inspire a landmark $100 million gift and unleash the power of a data-driven approach to global conflict.