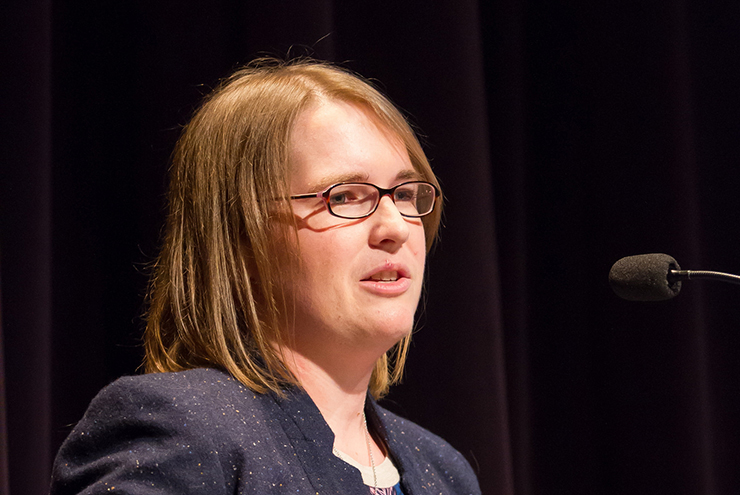 On January 2, 2018, the Harris School of Public Policy lost one of its most beloved community members, alumna Cynthia (CC) DuBois. CC was a 2010 graduate of the MPP program who helped found the Harris Alumni Council and was its President from June to November of 2017, when her battle with brain cancer forced her to step down.

CC completed her PhD in Human Development and Social Policy from Northwestern University this past fall, with the first chapter of her dissertation, “The Impact of ‘Soft’ Affirmative Action Policies on Minority Hiring in Executive Leadership: The Case of the NFL's Rooney Rule," published in the American Law & Economics Review in 2016.

Her research found an affirmative link between the increase in the hiring of minority head coaches in the NFL and the Rooney Rule that requires the NFL to interview minority candidates, the results of which she presented at the MIT Sloan Sports Analytics Conference in 2017. A fan of all things trivia-related, CC can be heard trying to stump contestants with her knowledge of the Rooney Rule on the live game-show Tell Me Something I Don’t Know, hosted by Stephen J. Dubner of Freakonomics Radio. Additionally, her new working paper, “The Effect of Court-Ordered Hiring Guidelines on Teacher Composition and Student Achievement” was discussed at length in The Atlantic article “A Root Cause of Teacher Diversity Problems” in January 2018.

“True to her Harris roots, CC crafted a research portfolio in the field of labor economics that was significant, multidisciplinary, and highly informative for policy,” says Harris School Dean Katherine Baicker. “Her research on the efficacy of “hard” versus “soft” affirmative action policies, such as the NFL’s Rooney Rule for hiring head coaches, garnered early attention and praise. Like all who met her, I was struck by her sharp intellect, generosity of spirit, dedication, and warmth.”

The former interim Dean at the Harris School Kerwin Charles, the Edwin A. and Betty L. Bergman Distinguished Service Professor, was a critical mentor to CC. He served as a member of her PhD dissertation committee and they frequently collaborated on various Harris School-related events and tasks. She can be heard giving a passionate introduction of Professor Charles at a Harris event in 2017.

“CC was an uncommonly creative and brilliant thinker. Rarer still was her blend of generosity, diligence, good humor, and bravery. I am deeply honored and grateful that she counted me among her mentors, as she taught me so much more than she ever learned from me.”

Before pursuing her PhD at Northwestern, where she was a Presidential Fellow, CC worked at the American Institutes for Research as a research associate. Prior to joining Harris in 2008, she interned with the U.S. Department of Agriculture in Moscow where she researched and prepared trade policy and agricultural economic reports for Russia, Belarus, Armenia, and Georgia.

CC, As Remembered By Her Loved Ones and Admirers

CC was recently succeeded as Harris Alumni Council President by her close friend Libby Pearson, MPP’10 who remembers CC as a leader who was deeply funny and a believer in all things Harris.

“When CC was a Harris student, she could always be found leading Harris initiatives,” says Pearson. “She had an amazing sense of humor. She once had a few of us convinced that she could read palms.”

Those who knew CC describe her as a singular person who left an enduring imprint on the lives of others.

“CC had a personal touch that is rare today,” says Bora Un, Director of Alumni Relations, who worked closely with CC on the Harris Alumni Council. “She had a real skill for listening and understanding the perspectives of others. I think that’s why people were so attracted to her and why she was such an impactful leader.”

When CC became President in 2017, she personally reached out to all 20 members to hear their thoughts, concerns, and hopes for the future of Harris. She was known to ask challenging and thoughtful questions while building consensus among the many voices around the table. She worked tirelessly to grow the future classes of Harris and was consistently seeking to elevate the Harris brand. Though CC’s cancer treatments left her exhausted, Un says that she never missed a Council meeting, even leading one via conference call from her hospital bed. “She led a two-hour meeting with members from across the country and the globe,” says Un. “She was incredible and cheerful from beginning to end.”

This story would not surprise Rebecca (Solomon) Metcalf, MPP ‘11, who did not know CC was ill until hearing of her passing. “In all the emails I received from CC, she never gave the slightest indication of what she was going through. I find this to be incredibly fitting because that is exactly who CC was: one of the most positive people I've ever known, always smiling, and passionate about everything Harris-related,” she says. “CC left an indelible mark on my time at Harris, as she did for so many.”

Classmate Megan Milliken Biven, MPP ’10, remembers when CC directed the 2010 Harris Follies, a night of music and comedy that benefited Women in Public Policy (WIPP). She says, “One of my happiest Harris memories features CC leading a group of highly competitive individuals in a rendition of ‘Always Look on the Bright Side of Life.’ CC was a genuine and authentically kind human being who will be deeply missed.”

A consistent theme emerges when others speak of CC: she had an uncanny ability to touch others—even when she had no idea she was doing so. First-year Harris student Adeline Yeo is among the many who shared how CC affected her.

“The only time I saw CC was during her speech at our matriculation ceremony. I was struck by her energy and passion. Her heartfelt and wise speech lit up the stage, even though she had difficulty walking to the podium due to her illness,” says Yeo. “I was touched by her commitment. CC never saw me, yet she was a person who moved a complete stranger in just a few moments.”

During CC’s illness, she and her partner John Boller, senior lecturer of mathematics at the University of Chicago and a long-time instructor for the Harris School Math Camp, were visited by dozens of close friends who traveled from near and far to spend time with her.  John sent regular “Team CC” emails out to her 250-deep fan club.

John and CC were a Harris school romance, brought together by team trivia at the Ida Noyes pub and a first date at the Lyric Opera. They spent eight years together enjoying a shared love of travel, golf, fine dining, LSU football, the White Sox, theater, and of course, trivia.

“CC was one of the most accomplished people I’ve ever known and also the humblest,” says Boller. “I am going to miss everything about her.”

Boller describes CC as a force of nature who upon discovering something worth doing, committed herself fully to doing it well, whether that was policy research, sports, or calf roping.

“While most young girls in Louisiana were being pushed towards events like barrel racing, CC stood firm in her drive to be one of the only female calf ropers,” says John. “She became a champion who could kick all the boys’ behinds. She also taught herself to play golf in graduate school and ended up with an impressive 14 handicap.”

CC grew up surrounded by horses on a ranch in Louisiana and received her bachelor's degree from Louisiana State University. She received a prestigious Harry S. Truman Scholarship in her junior year at LSU in recognition of her leadership and public service commitment and remained actively involved with the scholarship organization until her passing.

A reception in CC’s honor is being organized in Chicago by her many friends from Harris, Northwestern, and her home state. It will take place on February 10 at the Chicago Cultural Center from 5-9 PM.  Anyone who would like to attend, should reply here.  The Harris School is planning an additional reception to take place during Alumni Weekend in early May. Anyone who would like to be involved should email harrisalumni@uchicago.edu and sign up to receive email updates.

Please feel free to contribute a memory of CC that will be shared with her partner and family. In lieu of flowers, please make a donation in CC’s honor at one of her preferred charities: The LSU Foundation or the Truman Scholarship Association.