Harris at Home and the Pivot to Digital

The Keller Center was abuzz with traffic and conversation one day and silent the next.

The unprecedented COVID-19 pandemic forced the pivot from in-person to remote learning with remarkable speed. Practically overnight, Harris Public Policy students and professors were logging into Zoom from homes all over the world.

There have been bumps, bright spots, and rapid acquisition of new skills and better earbuds.

“I went in thinking, ‘How can I make this as not bad as possible?,’’ recalls Professor Christopher Blattman, whose Order and Violence course explores why some countries are peaceful and prosperous while others remain poor and war-torn.

Blattman moved operations from Keller to the small office he shares with his wife in their Hyde Park home. Merton H. Miller, a UChicago economist and Nobel Laureate, once lived there. From the desk Miller used for his ground-breaking work, Blattman began conducting Zoom office hours, lecturing, and leading class discussions.

Blattman is a blogger and frequent podcast guest, and he returns more than his share of YouTube hits via Google search. Before COVID-19 cleared campuses, though, he had not taught online.

A researcher by instinct, he reached far and wide for advice. The best he found: “You’re not going to design the world’s best on-line class in a few weeks – so everyone should just take it easy on themselves.’’

In those early remote days, Blattman tried the most technically challenging approaches – such as using video editors to perfect pre-recorded lectures. He found it wasn’t worth his time or his students’.

“In the end, I just cut 20 percent of what I wanted to tell them and built in more time for discussion. Two or three times in a class, I say, ‘OK, we just learned this. So, what would your policy be? How would you advise the head of USAID?’’’

No doubt his approach will continue to evolve, Blattman said, but the first round worked out far better than he had anticipated. “We seem to have exceeded students’ expectations,’’ he said.

Nitika Jain, MAIDP'20, sees it that way. Harris’ quick foray into remote learning exceeded her expectations, she said, in large part because of Blattman’s concern for student discussion. Jain felt her voice was heard and her understanding enhanced.

Accessibility was key for her. “I would argue that I’ve had more time with the professors,’’ said Jain who also took Rebecca Wolfe’s Conflict and Humanitarian Intervention course. “The only thing I miss is seeing everyone as a cohort, having those non-academic discussions at Keller.’’

Jain finished her Master’s Degree in International Development and Policy from her Hyde Park apartment, Zooming in from the sofa or bed’s edge. “For some reason I found it very hard to work on my desk. These are cozier spaces….though probably not the best for my back.’’

Jain earned a master’s degree in education from the University of Hong Kong and then worked in Myanmar as a curriculum development advisor before entering the Harris School program.

Student and a TA in two classes, Mark Sheppard found that the most significant challenge for students was not the remote learning platforms and methods, but the pandemic that forced them.

“There’s a stress, a mental fog that we feel. It’s not due to remote learning as much as being stuck inside with a low-level but constant fear,’’ said Sheppard, who set up shop in the living room of his Kenwood apartment, buying wall art and plants to spruce up the desk area for Zoom.

Michael D. Belsky, AM'83, saw that stress, too, and tackled it head-on with music and lots of direct contact. In Fundamentals of Municipal Bonds, he wrapped up each Zoom class with a music video, inviting students to stay around for a while.

“I picked songs about keeping your head up and moving forward, about supporting each other,’’ said Belsky, Executive Director of the Center for Municipal Finance at Harris.

Belsky was especially mindful that his students, many earning a Municipal Finance Certificate, would be stepping into a difficult job market.  He tried to be encouraging and helpful.

“Most cities’ budgets are 80 percent personnel, and most of that is police and fire,’’ and that makes the work of government finance more vital than ever, Belsky told his students. Yes, there are hiring freezes, but there also will be an increased need for consultants working with governments facing these extreme pressures, he told them.

On Canvas, the learning management system, Belsky posted names of firms and personally sent along students’ resumes to the many contacts he made working for more than 30 years in the municipal bond industry. He checked in with students.

Belsky made COVID-19 a large part of the discussion.

He established a Canvas module for each class and another one focused on COVID-19. He included webinars from Standard & Poor’s and Moody’s, the bond ratings agencies, addressing the pandemic’s ramifications for state and local governments.

“I didn’t expect them to watch each one, but I wanted them to be involved,’’ to see the crisis’ immediate impact.

Similarly, Sheppard said he found that the pandemic created a fascinating and rich relevancy in the two courses he was taking – Fiscal and Monetary Policy in the 21st Century, and Health Policy and U.S. Politics.

“They are so on the nose for this,’’ Sheppard said. “In their own right both classes are very forward-looking, but no one could have predicted that these two classes would collide’’ like they have because of issues surrounding COVID-19.

Sheppard earned his undergraduate degree in legal studies concentrating in law and economics from University of California at Berkley and his first master’s degree, in political economics, from Georgetown University. He expects to pursue a PhD.

Sure, Sheppard said, a few “talk-and-chalk professors’’ found the sudden transition to screen sharing and chat rooms a little tough. Largely, though, instructors quickly mapped their curriculum and methods to best leverage features of Zoom, Canvas and Slack.

Camilo Arias Martelo would say that about Fiona Burlig, who teaches his Program Evaluation course. She lectures synchronously and then splits the material into 10- to 15-minute segments for posting online.

And that was perfect for him – in some ways better than sitting in a classroom for long periods.

“Having the opportunity to move around between videos is good for me, and it’s easier to watch a set of seven videos rather than one long lecture,’’ said Arias, who earned his undergraduate degree in economics from Universidad Iberoamericana and worked as a research assistant in Mexico City in the field of environmental economics before entering the Harris program.

Cloud Computing, taught by Prof. Lionel Barrow and offered by Harris in collaboration with the Computer Science Department, was a natural to adapt to online learning, Arias said.

The combination of Zoom discussion, prerecorded lectures, recorded instructions for assignments, and having professors available for troubleshooting made for an effective class experience, said Arias, who shared his girlfriend’s living room for their Zoom classroom.

“These are things we can benefit from long-term,’’ said Arias, who also was a TA in an undergraduate Economics Department class.

While the first round of remote learning was a successful in many ways, especially considering the rushed nature, Blattman, Belsky, and their Harris colleagues are working on enhancements for moving forward.

Remote Learning 2.0 will benefit from time for thoughtful planning, and the lack of worry about small but important elements, like mute and unmute buttons.

“For students who can’t get to campus, what can we do that is that valuable for them, like a bonus?’’ Blattman said.

That could mean more policy labs or similar boutique-like experiences. It could mean enlisting a broader cast of instructors, since location is not necessarily a factor.

“Now that distance isn’t an issue, how we do deliver a different educational experience? How do we redeploy resources to have more impact?’’ 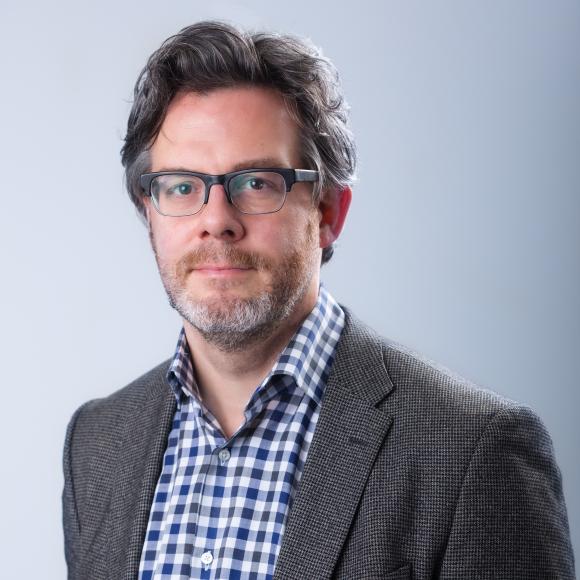 A faculty member in The Pearson Institute for the Study and Resolution of Global Conflicts, Chris Blattman focuses on why some people and societies are poor, unequal and violent, and how to tackle these issues. His book, Why We Fight,&nbsp;is scheduled&nbsp;for release by Viking Press in 2021-22....
Read more