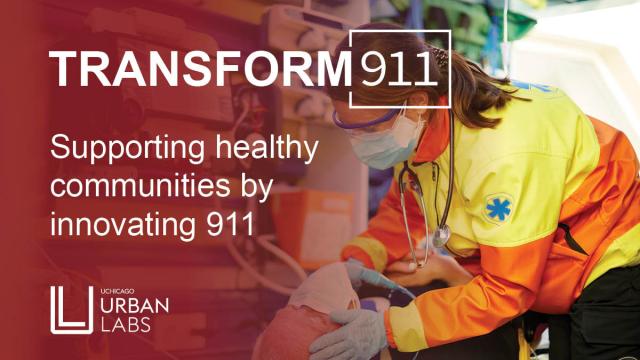 The University of Chicago Health Lab has launched an initiative to transform the nation’s 911 emergency system, fueled by more than $1.1 million in funding from Arnold Ventures, a Houston-based philanthropy dedicated to tackling some of the most pressing problems in the United States, and $100,000 from Microsoft’s Justice Reform Initiative.

TRANSFORM911 will gather stakeholders from many sectors to explore ways to promote equitable crisis response and access to emergency services, enhance public health, improve public safety, and support first responders’ ability to do their job effectively. In appreciation of the critical role that public safety telecommunicators play as gatekeepers to our nation’s emergency crisis response system, the project is being announced during National Public Safety Telecommunicators Week and amid increased public awareness about racial inequality in law enforcement across the United States.

The National Emergency Number Association (NENA) estimates at least 240 million 911 calls are made each year. Research demonstrates that most calls are not related to a crime in progress, but still elicit a police response. As a result, police are increasingly deployed to address complex problems outside their training such as mental health crises and homelessness. TRANSFORM911 aims to redesign our nation’s emergency response system to prioritize better health and safety outcomes by deploying a diverse set of professionals such as public health and mental health practitioners in lieu of and alongside police, emergency medical technicians, and firefighters.

“The dedicated women and men who support 911 save countless lives, but the system is designed to default to immediately deploying police officers, when other professionals trained in mental health or other disciplines might be better suited to respond,” said S. Rebecca Neusteter, PhD, executive director of the University of Chicago Health Lab and the principal investigator of the project. “The automatic deployment of police is an untenable role for officers, who aren’t trained or resourced to play such an all-encompassing role. It can also sow distrust and cause devastating harm, especially for Black and brown individuals. Exploring approaches that work better for everyone—including public safety telecommunicators, community members, and first responders—is well overdue.”

University of Chicago staff will facilitate an evidence-based, collaborative process over 18 months to rethink the current 911 system; develop recommendations for local, state, and federal policymakers; and craft detailed plans to implement changes.

"When police are deployed to address a mental health or substance use crisis, we run the risk of not only criminalizing a health problem, but exacerbating a situation better handled by behavioral health professionals," said Walter Katz, vice president of criminal justice at Arnold Ventures. "If our 911 systems responded to crises with appropriate resources, we would take a burden off police officers and likely save lives." 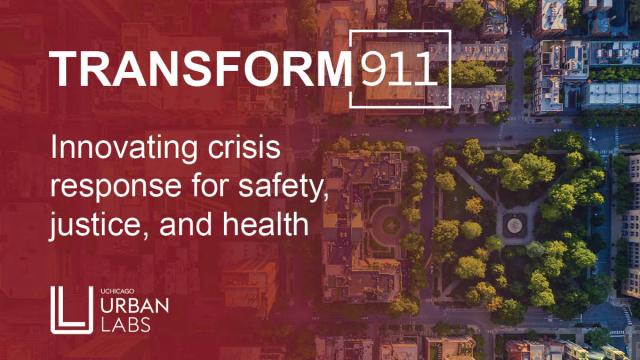 The TRANSFORM911 project is led by the Health Lab, one of five labs that comprise University of Chicago Urban Labs, part of the University of Chicago Harris School of Public Policy. Harold Pollack, PhD, co-faculty director of Health Lab, serves as the project's co-principal investigator alongside Dr. Neusteter. The Health Lab will engage many partner organizations and communities in the project, including New York University School of Law’s Policing Project, to ensure broad participation in developing recommendations.

“The 911 system is a universal life-saving resource across the nation,” said Merisa Heu-Weller, head of Microsoft’s Justice Reform Initiative. “We support TRANSFORM911 because it will help drive a much-needed dialogue around how we support our first responders, enhance public health services and improve public safety.”

TRANSFORM911 will convene a national dialogue with many diverse stakeholders about how to transform the 911 system from one that historically has reflexively defaulted to the police to one that centers health and safety. The project will undertake a comprehensive literature review and create an online resource hub to share information.

TRANSFORM911’s website will serve as a hub for 911-related innovations, research, and opportunities and is expected to launch at the end of April with convening activities to follow soon after.

About the University of Chicago Health Lab

Arnold Ventures is a Houston-based philanthropy dedicated to tackling some of the most pressing problems in the United States. Founded by Laura and John Arnold in 2010, Arnold Ventures’ core mission is to improve lives by investing in evidence-based solutions that maximize opportunity and minimize injustice. More information about Arnold Venture’s work is available at www.arnoldventures.org.