Saving the Planet through Municipal Bonds?

In the 1987 movie Wall Street, Gordon Gekko became the face of financiers and the financial system as a whole for much of middle America with his craven adage, “Greed, for lack of a better word, is good.”

Yet finance and investment are not as Hollywood would have you believe. By efficiently allocating capital, the tools of the finance trade are intended to have measurably positive effects on society.

That’s certainly the case with a new investment vehicle that has emerged that is taking hold with socially conscious issuers and investors around the world.

That investment vehicle is called the “green bond”.

In markets like Europe, Africa, South America, India, and the United States, municipalities and corporations are using green bonds to fund projects that have measurable environmental or social benefits.

Proceeds from green bonds are earmarked for “green” projects, and issuers provide specific data on the impact these projects have on a climate-challenged world.

Green bonds create a virtuous cycle in which issuers access low-cost capital to fund critical infrastructure projects; investors earn solid returns on lower-risk fixed income investments while also meeting their mandates for environmental, social and governance (ESG) investing; and communities reap the benefits of enhanced economic development. Or, put more simply, people can more easily get loans for environmentally-conscious projects; those giving the loans get solid returns on their investments; and neighborhoods around the country benefit with new, sustainable roads, bridges, buildings, etc.

Earlier this year, the Center for Municipal Finance (CMF) at the University of Chicago Harris School of Public Policy, headed by executive director Mike Belsky, brought together a diverse group of stakeholders to promote the future of green bonds. The roundtable included chief financial officers of municipalities, fixed-income portfolio managers, independent assessors of environmental impact, and representatives of communities that have used these bonds to fund major infrastructure projects.

At the conference, panelists discussed current trends in green bond investments, the rapid growth of investor demand for ESG (that is, environmental, social, or governance) investment vehicles, current best practices for measuring performance, the role these bonds can play in a diversified portfolio, and the long-term impact of socially conscious investing.

CFOs were encouraged to use green bonds to fund a wide range of infrastructure projects that in turn protect issuers and communities from a broad range of climate risks that can impact long-term financial performance – and, of course, much more.

“Many decision makers—especially in the U.S.—do not fully understand the many benefits of green bonds,” said Steve Libertore, managing director and fixed-income portfolio manager at TIAA Investments, the world’s third largest holder of labelled and non-labelled green bonds. “It was interesting and valuable to speak directly to issuers—and also to see first-hand their level of interest and desire to do the right thing.”

Participants also shared many examples of communities that are actively using green bonds as competitive economic development tools to promote renewable and alternative energy, water treatment, LEED certified buildings, and the like:

The state of Wisconsin issued general obligation bonds and also a second issue of green bonds on the same day – and the green bonds sold at a lower interest rate because of the greater demand.

And in upstate New York, a manufacturer of hair products was preparing to move out before a local municipality agreed to place two wind turbines on the property. That gave the company direct access to wind power—and increased manufacturing capacity.

“Sharing these guidelines, examples and outcomes made green bonds much less confusing and intimidating,” Liberatore added. “It encouraged participants to develop coherent missions for ESG investing while providing the information participants need to speak with their underwriters.”

Mike Paparian, who promotes green bonds as Calif Rep of the Climate Bonds Initiative. He positioned climate change as an issue that’s becoming increasingly important to municipal finance officers around the country.

“It’s easy to take a short-term, immediate-needs perspective rather than one focused on longer-term financial and economic impacts,” Paparian said. “But these days, Moody’s and other ratings agencies are telling local governments that their ratings will be impacted by their ability to fund future climate related issues.”

“As a result,” he added, “bond investors seek disclosures that municipalities have thought about the impact of climate change during the life of the bond.”

Green bonds are just one example of how the Center for Municipal Finance raises awareness of fixed income funding. CMF is one of the few academic institutions that focuses on municipal bonds, and it is unique in bringing data-driven analysis to this growing industry.

Meanwhile, CMF academic director Christopher Berry, the William J. and Alicia Townsend Friedman Professor at Harris, is researching the complex factors that transform state pensions from well-funded to poorly funded. This is an important topic given Detroit’s bankruptcy ordeal, and the fact that federal law prevents Illinois from declaring bankruptcy despite huge pension liability that crowds out funding for education and transportation. Solutions developed for Illinois—including alternatives to its largely regressive property tax system—have the potential to inform other states as well.

“We need to rethink the practices and techniques of contemporary municipal finance to provide government services more efficiently and to manage pressing problems related to the public sector,” Berry said.

“We noticed that the financial community outside the U.S. has already grasped the importance of green bonds—and of climate change more broadly—compared to counterparts in the U.S.,” Belsky said.

“While this county continues to debate climate change, this concern has already been built into most European business models. It will take even more leadership on our part to persuade more leaders to embrace science and recognize that climate change is an important future business issue.” 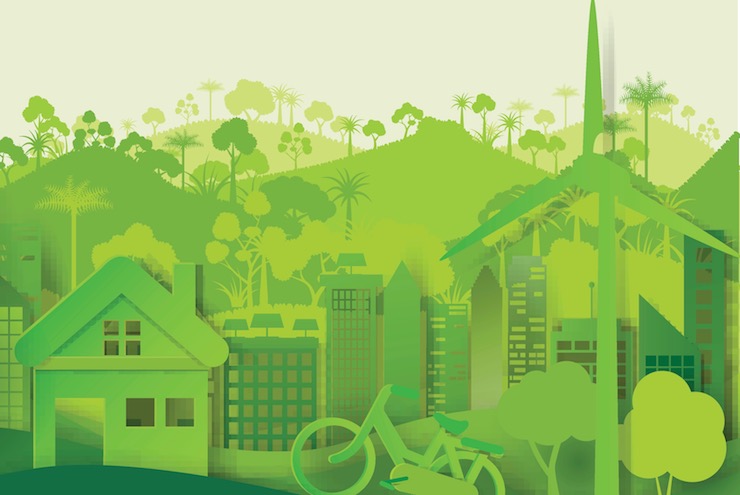 Christopher R. Berry is the William J. and Alicia Townsend Friedman Professor at the University of Chicago Harris School of Public Policy and the College. He is the academic director of the Center for Municipal Finance. He studies metropolitan governance and the politics of public finance.