More Americans Blame U.S. Government Than Other Countries or WHO for the Coronavirus Crisis

More Americans say the actions of the United States government caused the coronavirus situation in the country than attribute it to the policies of foreign governments or the World Health Organization.

This is among the findings of a new UChicago Harris/AP-NORC Poll being released in conjunction with the 2020 Pearson Global Forum, a virtual event that brings together researchers and policymakers to develop strategies to prevent and resolve international conflicts. 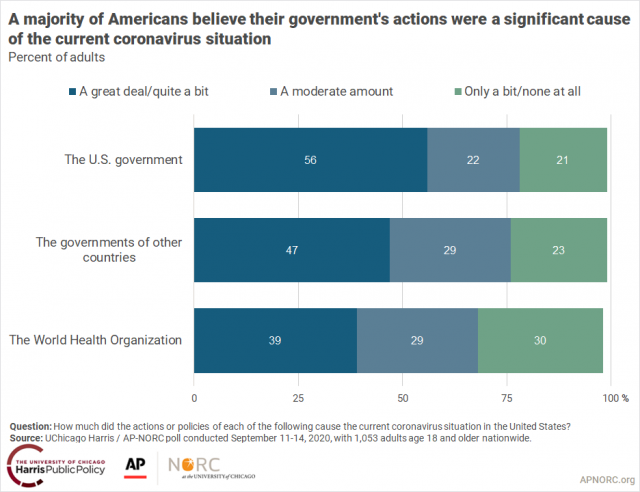 Americans are also more likely to say the United States should have a major role in developing a coronavirus vaccine (78%) than to say the same about the World Health Organization (57%), countries in the European Union (55%), and China (51%).

Yet, only 57% intend to get a vaccine when it is available, and that figure declines to 46% if the vaccine were to be developed outside the United States. 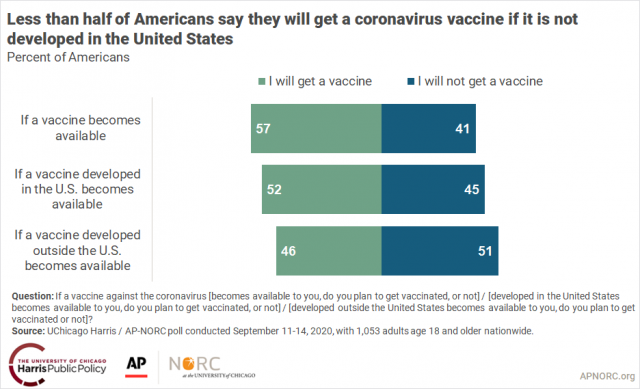 If the United States develops a vaccine, a majority say it should be kept for Americans first, even if that means fewer around the world are vaccinated right away.

“More than half of Americans prefer to keep the vaccine for U.S. citizens first, rather than share it with other countries,” said Austin Wright, an assistant professor at Harris and an affiliated faculty member at The Pearson Institute for the Study and Resolution of Global Conflicts. “Republicans are more likely than Democrats and independents to hold this belief, even though they also say that they are less likely than others to get vaccinated.”

The poll shows a stark partisan split on who is to blame for coronavirus situation in the United States and the development of a vaccine. For example, 55% of Republicans fault the World Health Organization for the coronavirus situation in the United States compared with 28% of independents and 27% of Democrats. And they are then less likely than independents and Democrats to want the World Health Organization to play a major role in vaccine development (39% vs. 59% and 75%, respectively).

“The poll shows how Americans’ attitudes about who should lead the development of a vaccine and whether people will get a vaccine have become highly partisan,” said Trevor Tompson, director of The AP-NORC Center. “The findings highlight the significant challenges surrounding the global development and distribution of a vaccine.”

Data were collected using the AmeriSpeak Omnibus®, a monthly multi-client survey using NORC’s probability-based panel designed to be representative of the U.S. household population. Interviews for this survey were conducted between September 11 and 14, 2020, with adults age 18 and over representing the 50 states and the District of Columbia. Panel members were randomly drawn from AmeriSpeak, and 1,053 completed the survey—995 via the web and 58 via telephone. Interviews were conducted in English. The final stage completion rate is 19.5%, the weighted household panel response rate is 21%, and the weighted household panel retention rate is 80.4%, for a cumulative response rate of 3.3%. The overall margin of sampling error is +/- 4.13 percentage points at the 95% confidence level, including the design effect. The margin of sampling error may be higher for subgroups.