The new student orientation experience kicks off with the Welcome Address, a quintessential part of the orientation experience. This annual address is not only a chance for you to engage with other incoming students, but also to learn more about the impact of public policy and the academic journey you are about to embark on.

The Perfect Beginning to Your Harris Experience

You'll be welcomed to campus and Harris by the Harris Student Government and you’ll learn from the President of the Harris Alumni Council, about Harris' fantastic alumni network you will soon join.

You’ll hear the future vision of Harris from the Dean of Harris, Katherine Baicker, a leading scholar in the economic analysis of health care policy. Dean Baicker’s research focuses primarily on the factors that drive the distribution, generosity, and effectiveness of public and private health insurance, with a particular focus on health insurance finance and the effect of reforms on the distribution and quality of care. She is currently one of the leaders of a research program investigating the many effects of expanding health insurance coverage in the context of a randomized Medicaid expansion in Oregon. Her research has been published in journals such as the New England Journal of Medicine, Science, Health Affairs, and the Quarterly Journal of Economics. Before coming to the University of Chicago, Baicker was the C. Boyden Gray Professor of Health Economics in the Department of Health Policy and Management at the Harvard T.H. Chan School of Public Health.

Raised in Wilmington in the First Senate District, she graduated from Cab Calloway School of the Arts and American University.  She has been involved in community advocacy for most of her life, including working for former Governor Jack Markell, the late Attorney General Beau Biden, and as a White House intern during the Obama Administration. Most recently, she served as a spokesperson for the Human Rights Campaign, the nation’s largest LGBTQ equal rights organization.

Prior to her service in the State Senate, McBride led the successful effort to pass a landmark non-discrimination law in Delaware, worked with state leaders to expand health care covered by Medicaid, and championed legislation protecting vulnerable youth from child abuse.

McBride has taught public policy at the University of Delaware and is the author of the 2018 memoir, “Tomorrow Will Be Different.”

For her work and advocacy, former Gov. Markell awarded McBride the Order of the First State, making her one of the youngest Delawareans granted the state’s highest civilian honor. When McBride was elected in November 2020, succeeding former state Senator Harris B. McDowell III, she became the first openly transgender state senator in American history.

As a state senator, McBride is committed to fighting for health care for all, strong public schools for every child, good paying jobs with real benefits for Delaware’s families, and safe communities where each resident is treated with dignity.

Sarah married her late husband Andrew Cray in 2014 and is the proud aunt of Juliette, Theo, Bennett, Sydney, Ben and Addison. 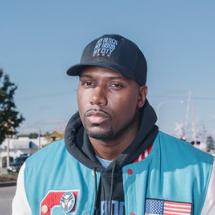 Cole, creator and CEO of My Block My Hood My City, Chicago's fastest growing social impact organization, has recently published a book for his campaign "It's Not Regular," pointing out inequities between neighborhoods.