Leah Castleberry, Class of 2020, is a native of Chicago’s South Side who was raised in a single-parent home by a loving and devoted father. An educator and musician, her father instilled in his daughter a love of learning, curiosity about the world, and pride in her heritage and hometown that still influences her today; Castleberry is a successful professional, a world traveler, and a notable blogger.

Perhaps most important, Castleberry’s upbringing taught her to set her own goals and helped her develop the self-confidence to pursue them.  Now she is enrolled in The University of Chicago Harris School of Public Policy’s Master of Public Policy (MPP) program to acquire the skill sets needed to achieve her ultimate goal: helping improve the lives of her fellow Chicagoans.

Castleberry’s academic journey began when she was awarded a full scholarship to Howard University in Washington, D.C., where she majored in international business. “I felt that going to school in the nation’s capital and developing a career in international business would give me the broadest possible range of options for my career,” Castleberry says.  She made the most of Howard’s location by taking a temporary position in the White House Office of Presidential Correspondence, where she helped sort and organize mail sent to President Barack Obama.

A few months later Castleberry began interning at the Office of India Affairs in the U.S. Department of State, helping to coordinate the Fourth Annual U.S.-India Strategic Dialogue, among other events. Later that year, she traveled to India as a student consultant on the Howard University School of Business Study Tour with IBM India.

Her interest in public policy began in her junior year in college, when Castleberry participated in the Public Policy and International Affairs (PPIA) Junior Summer Institute at Carnegie Mellon University’s Heinz College of Information Systems and Public Policy.

Through its affiliation with PPIA, Castleberry first learned of Harris. Then, as a recipient of the University of Chicago’s HBCU Bridge Scholarship in 2017, she enrolled in the Graham School’s Graduate Student-at-Large program.  “My first class was ‘Race, Politics, and the Press in Chicago’ at Harris,” Castleberry says. “That’s why I felt part of the Harris School family even prior to beginning my MPP journey.”

In 2015, Castleberry continued to broaden her understanding of the world by traveling to China through the Congressional Black Caucus Foundation (CBCF) Emerging Leaders U.S.-China Study Abroad program. Attending lectures on Chinese language, culture, politics, and socioeconomic relations with the U.S., Castleberry also networked with U.S. international business executives, strengthening her network at home and abroad.

In 2017, she participated in another CBCF exchange program and traveled to Japan as part of the Kakehashi Project to strengthen relationships between the African-American and Japanese communities.

After her graduation from Howard, Castleberry accepted a position as a consultant with IBM Global Business Services in Chicago. While completing a two-year entry-level consulting program, she managed, as a certified scrum master, projects aligned with agile methodologies. She was later promoted to senior consultant in the Watson Cognitive Solutions division and traveled the country teaching foundational design thinking and cognitive technology courses to hundreds of other IBM employees.

Although Castleberry originally had sought a career with an international scope, the more she prospered professionally and traveled to distant places, the more she wondered about how she could apply those experiences to finding solutions to local challenges facing her hometown of Chicago.

“While I had begun building a successful corporate career, I was still feeling largely unfulfilled,” Castleberry explains. “I wanted to do my part to improve the lives of others — particularly those from marginalized communities — and felt that pursuing a professional degree would help me make a meaningful career transition.”

Given her previous history of charting her own path, it seems only natural that Harris’ emphasis on individual choices would attract Castleberry. “Harris offers many distinct advantages over other policy institutions,” she says. “Its certificates, policy labs, and the opportunity to curate a curriculum based on my own interests in year two of the MPP program are sure to provide an unmatched graduate school experience.” Finally, Castleberry found it compelling that Harris encourages students to take their learning experience into their own hands and to use the city of Chicago as their extended classroom.

“After earning my MPP, I hope to begin my career as a policy analyst at a local organization aimed at solving urban and social policy issues throughout the city,” Castleberry says. “I’m convinced that Harris’ emphasis on data-driven decision making makes it the best place for me to study policy.”

END_OF_DOCUMENT_TOKEN_TO_BE_REPLACED 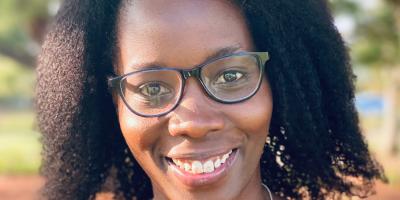