Harris Public Policy is proud to host “UNPACKED: Refugee Baggage,” which seeks to humanize the word “refugee.” Created during the summer of 2017, this multi-media installation is the work of Syrian-born, New Haven, Conn., artist and architect Mohamad Hafez and Iraqi-born writer and speaker Ahmed Badr.

For “UNPACKED: Refugee Baggage,” Hafez sculpturally re-creates rooms, homes, buildings and landscapes that have suffered the ravages of war. Each of the nine pieces is embedded with the voices  and stories of real people — from Afghanistan, Congo, Syria, Iraq and Sudan — who have escaped those same rooms and buildings to build a new life in America. Their stories are collected and curated by Badr, who attends Wesleyan University and is himself an Iraqi refugee. Visitors experience short audio clips through headphones and can continue reading the stories online and on exhibit placards.

“UNPACKED: Refugee Baggage” will be on display at the Keller Center in the Cafe for six months beginning on April 22, 2019, and artist Mohamad Hafez will serve as the Keller Center’s first artist-in-residence.  A Syrian artist and architect, Hafez was born in Damascus, raised in the Kingdom of Saudi Arabia, and educated in the Midwestern United States. Expressing the juxtaposition of East and West within him, Hafez’s art reflects the political turmoil in the Middle East through the compilation of found objects, paint and scrap metal.

His work has been profiled by NPR, New Yorker Magazine, and The New York Times. With four highly acclaimed exhibits under his belt, Hafez creates surrealistic Middle Eastern streetscapes that are architectural in their appearance yet politically charged in their content. Hafez will also be participating in an artist reception during the Keller Center Grand Opening on May 3 from 12-12:45 p.m.

The exhibit was previously on display at Yale Law School and Julliard.

END_OF_DOCUMENT_TOKEN_TO_BE_REPLACED 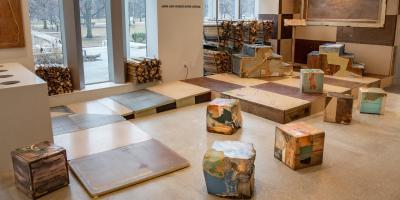