According to a 2015 UNESCO report, gender parity in primary and secondary education still eludes more than half of the world’s nations. While many researchers are exploring ways to best close the gap, new research by University of Chicago Harris School of Public Policy Assistant Professor Anjali Adukia indicates that one key may be better access to toilets.

“Often when people think about education in a developing context, they think "let's give laptops to every child,”” said Adukia. “However, I draw from Maslow's Hierarchy of Needs, where if you don't have the base of the pyramid—your basic needs: Are you hungry? Do you feel safe? Do you feel secure?—it’s much harder to think about higher order functions.

“I’m interested in understanding how improving the health, privacy and safety of the school environment through sanitation could influence educational decisions of children across different ages and genders.”

According to Adukia’s paper, Sanitation and Education, school latrine construction substantially increases the enrollment of pubescent-age girls. But her findings also show that building such facilities can benefit boys, younger children and even teachers. This is especially interesting because while school construction is supported by a wide variety of organizations and foundations, the guidelines supplied by those groups often ignore or neglect sanitation facilities. In fact, even the standard school supported by the World Bank is not required to include latrines.

Until sanitation facilities were installed in thousands of schools across India, students and teachers would be forced to go behind signs, into thickets, or to find other out-of-the way places to relieve themselves during the school day. In fact, in many locations, administrators and even communities did not believe latrines were necessary for students. And yet, Adukia has found that the availability of latrines have a huge impact on all children – young or old, male or female.

“I found that regardless of your gender and age, access to latrines improved school participation for all children and lowered dropout rates,” said Adukia. “Pubescent-aged girls benefit greatly, which is something that NGOs often expect to see from this kind of literature, but what was really striking to me was that I didn't just see that girls were impacted, but that boys and younger children also substantially benefited, regardless of the type of latrine that was actually built.”

As for older children, most of the previous research that examines the link between sanitation facilities and student school attendance has put an emphasis has on pubescent girls. Girls in schools without toilets may not attend on menstruation days due to the stigma often associated with menstruation and the need for privacy. A 2004 study demonstrated that ten percent of Africa’s female students did not attend school on menstruation days, which could lead to falling behind and contribute to higher drop out rates.

Thus, pubescent girls need not only latrines, they need private, single-gender latrines. Where these were supplied, Adukia found higher levels of pubescent girls remaining in school. But their need is not only menstruation related. While completing her fieldwork for this research, Adukia heard many stories about girls and women who were attacked while attempting to relieve themselves. To avoid having to go behind bushes or buildings alone, some girls would forgo food and water at school or would wait until after school to use a latrine elsewhere, thus leading to urinary tract infections.

Still, the focus on pubescent girls often misses the very real needs of pubescent boys, Adukia points out. While her study found that pubescent boys benefit more from unisex latrines than do pubescent girls, single-sex latrines and their concomitant privacy has benefits for them as well. At all ages, boys express a preference for privacy and a fear of being bullied when using unisex latrines. Plus, as other research shows, boys may be more likely to be victims of bullying than girls.

But students may benefit in yet other ways from having gender-specific latrines available at their schools. Adukia surmises that female teachers are more likely to want to work at schools with gender-specific latrines and are more likely to show up for work regularly when such facilities are available. Obviously, women also prefer privacy and feel safer in such circumstances, but research has shown that girls especially benefit from having women instructors – both as role models and because they feel safer with other females. And, of course, all students benefit from having a teacher who is present regularly. Indeed, many of these schools have only one teacher, so if a teacher is absent, the school is effectively closed, thus removing access to education for those students on that day.

Naturally, the cleanliness and upkeep of the latrines over time affects their usefulness, but can be a challenge to address. Adukia explains in her paper that it can be problematic to put students in charge of keeping latrines clean as that job is often assigned as a punishment. Equally difficult is assigning the task to teachers, who in some parts of India do everything from painting walls to running local elections. Some regions are able to hire a private contractor to maintain the latrines, but this is not possible everywhere.

Adukia used two data sets in constructing her research, one provided by the Indian government that covered 139,000 schools, and another provided by a non-governmental organization to balance out potential reporting biases in the first set. In looking at the data, she focused on the results of the School Sanitation and Hygiene Education program, which put substantial resources toward widespread school latrine construction in 2003.  She then compared the enrollment and attendance records of the schools that had received latrines with similar schools that had not. Her investigation covered schools in districts that had income levels from the 10th to the 90th percentile for India, or the 5th to 25th percentile of world income distribution. This means Adukia’s research can be used to inform school construction in many parts of the developing world.

“Building latrines at schools that lack them, while improving sanitation overall, also improves the enrollment and attendance numbers for students at all levels,” said Adukia. “The presence of latrines does not appear to increase test scores, which means that more than improvements in attendance is required to enhance mathematics and reading learning. But they are an important first step in making students and teachers feel more comfortable, healthier and safer while at school.”

Image by jaimaa85, from iStock by Getty Images. 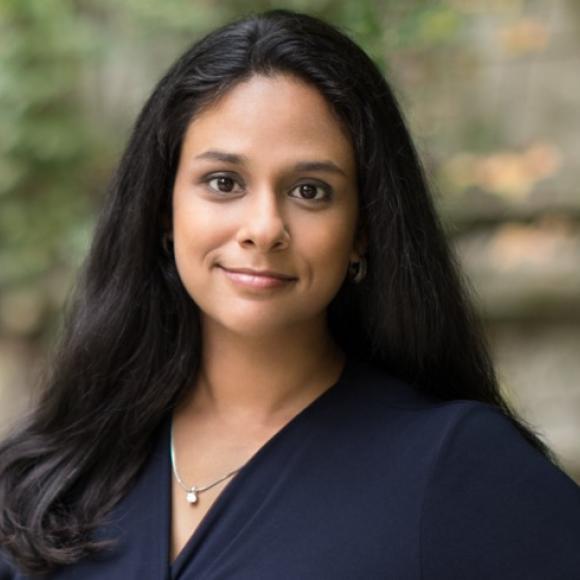 Anjali Adukia’s research is focused on understanding factors that influence educational decisions and the potential role for institutions, such as government agencies and nonprofit organizations, to improve child outcomes, particularly at the intersection of education and health.
Back to Top