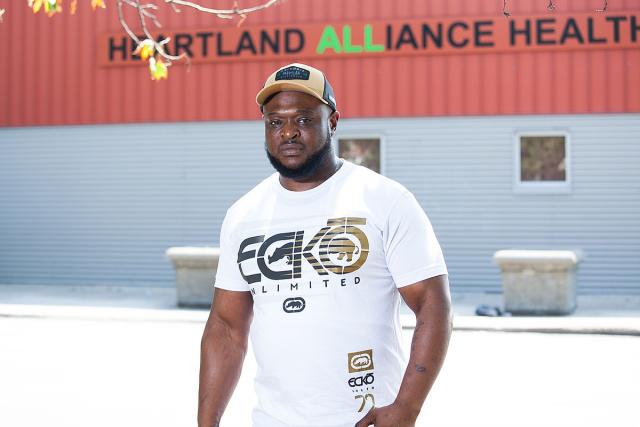 After 13 years in prison, Sylvester was determined to forge a constructive path when he was discharged in 2020.

He bumped into a friend he knew from the street who had become an outreach worker at READI Chicago, an innovative program created in part by University of Chicago’s Crime Lab and the Inclusive Economy Lab. Launched in 2017, READI Chicago is an intensive violence reduction initiative that provides two years of programming, including 18 months of paid employment, cognitive behavioral therapy, and comprehensive support, with an additional six months of job coaching after the work component ends. At his friend’s urging, Sylvester enrolled.

“That’s the best decision I’ve ever made in my life because it changed my life,” Sylvester, 36, recalled. “It changed my thought pattern. It helped put me in a mindset where everything doesn’t have to resort to violence.”

More than 1,000 men in Chicago who are likely to be perpetrators or victims of violence have been offered participation in READI (Rapid Employment and Development Initiative) Chicago, a Heartland Alliance program. Early evaluations show powerful impact: Participants—men who attended at least one READI orientation—are 79 percent less likely to be arrested for a shooting or homicide, according to preliminary results of the program released in July.

Almost as important are READI’s applicability to other cities looking to reduce gun violence and the foundational research legacy it is creating.

“To me,” said Monica P. Bhatt, senior research director of UChicago’s Crime Lab, “the collaborative process of how READI Chicago came to be is one of the best untold stories coming out of Chicago.”

READI Chicago is showing encouraging results at the same time the city is experiencing a spike in violence. Through Aug. 17, shootings have jumped to nearly 2,200—12 percent higher than the same time frame last year. Reports of homicides, while still tragically high, have risen at a lower rate: Chicago Police have recorded 499 through Aug. 17 compared to 488 for the same span in 2020.

READI started as a response to a more drastic, longer rise in violence in 2016. Chicago endured a 58-percent increase in homicides and 43-percent increase in non-fatal shootings that year, prompting leaders in the city to create the Partnership for Safe and Peaceful Communities (PSPC). PSPC was a funding collective to invest in evidence-based strategies to bring down gun violence. Representatives of Chicago’s professional sports teams, including the White Sox, Cubs, Bears, Blackhawks, and Bulls, established the Chicago Sports Alliance to use their public platforms and financial resources to support the initiative. JPMorgan Chase joined the effort as well.

Importantly, input from staff in community-based organizations such as the Institute for Nonviolence Chicago, Lawndale Christian Legal Center, North Lawndale Employment Network, UCAN, Centers for New Horizons, and Heartland Human Care Services, as well as men from the community helped inform how READI would be marketed to future participants. Those organizations also deliver READI Chicago under Heartland Alliance’s coordination.

UChicago’s Crime Lab and Inclusive Economy Lab, housed at the Harris School of Public Policy, along with researchers from the University of Michigan and Cornell University, were involved from the start, approaching Heartland with the concept of pairing cognitive behavioral therapy and transitional employment—both evidence-based strategies—in a program for men at the highest risk of perpetrating or being victims of gun violence.

That partnership brought together community organizations, philanthropy, a venerable social service institution, and an elite university with a reputation for rigorous data and social science research. The Crime Lab, which has been studying gun violence for more than a decade, sought to use its expertise and civic network to design, carry out and evaluate an ambitious initiative focused on delivering results for these men, a population for which a dearth of research and services exist.

“In 2016, everybody was trying to figure out what to do quickly because of the literal life and death impact that this sudden and sustained surge of violence was having,” recalled Roseanna Ander, founding executive director of UChicago’s Crime Lab. “In so many ways, the university was uniquely equipped to be responsive, nimble and solutions-focused and partner with an organization like Heartland that had the scale and capacity to really take this concept that we designed and turn it into a program. We worked hand in glove with them to do that.”

The two organizations met with men who had been involved in violence and with community-based groups working with that population, then refined the initiative and found organizations best equipped to work with the men. 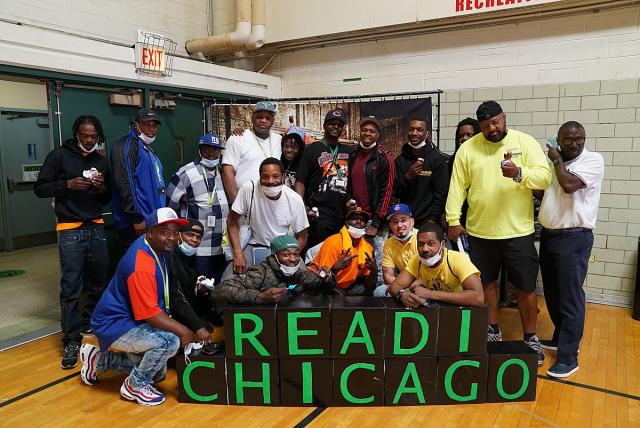 READI was launched in the fall of 2017 with partners that each make integral contributions, said Chasda Martin, director of programs for the effort.

A partnership with credibility gets local buy-in

Heartland’s history of working with community organizations, scaling up solutions and providing back-office resources was invaluable, he added.

“Without them, we never would have had a chance to get the local buy-in,” Martin said.

UChicago’s status as an elite research institution, its design of a precise, comprehensive evaluation of READI, and its development of a data assessment tool to find people at the highest risk of future gun violence made the university vital to the project, he said.

Ander called it “a really good iterative process. Frankly, I think it took 10 years of building the Crime Lab to have the trusting relationships we have with donors, government, community-based organizations, and philanthropy; to have our understanding of the data—all of those things that in this moment allowed us to step forward in a way that has been so comprehensive and gotten attention.”

READI focuses on adult men, the majority of whom are Black and have typically faced barriers to accessing a social service safety net commensurate to needs.

“These are the people who bear the brunt of the twin challenges of the harms of the criminal justice system and gun violence,’’ Ander said, “and yet our society basically says to them, ‘We’ve got nothing for you.’”

Sylvester said he had participated in similar services through the criminal justice system as a teenager but those fell far short. READI’s focus on “anger management” and financial assistance were particularly helpful, he added.

“This is the opportunity of a lifetime,” Sylvester said. He noted that staff at READI would reach out to him if he hadn’t checked in for a couple days. “That makes a person think. It gives you motivation and inspiration to do you better.” 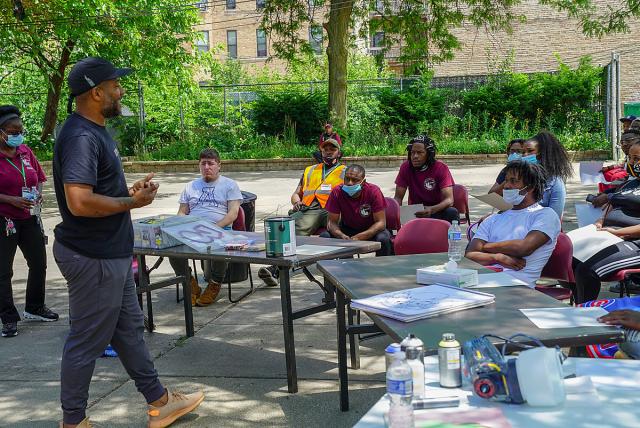 Prospective participants—some of whom are asked several times before enrolling or refusing altogether—are found via three sources: community partners, re-entry from the criminal justice system, and the data-based social provision risk assessment that UChicago’s Crime Lab developed. Every six months, the research team updates their program analysis with a focus on understanding if READI Chicago is effective in serving the men most at risk of violence. A final report on READI is set to be produced in 2023. In the interim, researchers provide monthly data reports to program providers to keep the focus on the target population and inform program improvement.

Rigorously analyzing the initiative while providing services to the participants yields “incredibly relevant insights” into what will work, Ander said. She added that READI Chicago may be the most ambitious study and intervention to reduce gun violence in the U.S.

“We need to have a lot more patience and appreciation for just how difficult these challenges are to solve,” she said, emphasizing the need for consistent funding, “and to do it in a way that really creates lessons. For long term policy and practice, there aren’t going to be quick fixes.”

Ander said she sees READI having “a long legacy of continued innovation that people draw on and iterate. Hopefully, we learn more and more over time so that we can have the highest impact strategies in the places where they’re needed most.”

“But the biggest lesson learned for me,” she added, “is that you can use both the READI model itself as well as how it was developed as a playbook that can be applied in other contexts.”

Interest from other cities and the White House

A half dozen cities have reached out to UChicago to discuss adapting at least some elements of READI Chicago. In June, READI Chicago Senior Director Eddie Bocanegra was among violence prevention experts who met with President Joe Biden. A month later, U.S. Attorney General Merrick Garland visited READI with U.S. Sen. Dick Durbin, and met with Bhatt, Bocanegra, and other representatives of the initiative.

“He was very interested in what the research says,” Bhatt said of Garland, who was born in Chicago and raised in a bordering suburb. “I think in this moment, the administration is looking for alternatives to the criminal justice system that are both empirically based and community driven—and there are not a lot of options out there that fit that description.”

“It’s amazing,” said Sylvester, who recently started a clothing line business. “Sometimes it brings tears to my eyes. I sit back with my wife and think that a year ago, I didn’t know what I was going to do.”

He has recruited two men to join READI and said he believes many more would participate if given a chance. For each participant, “a trickle-down effect” occurs from guys on the street who lead other, younger men, he said.

“Next thing you know,” Sylvester said, “a lot of things start changing. But it takes a lot of work.”

This article originally appeared at the UChicago Office of Civic Engagement.