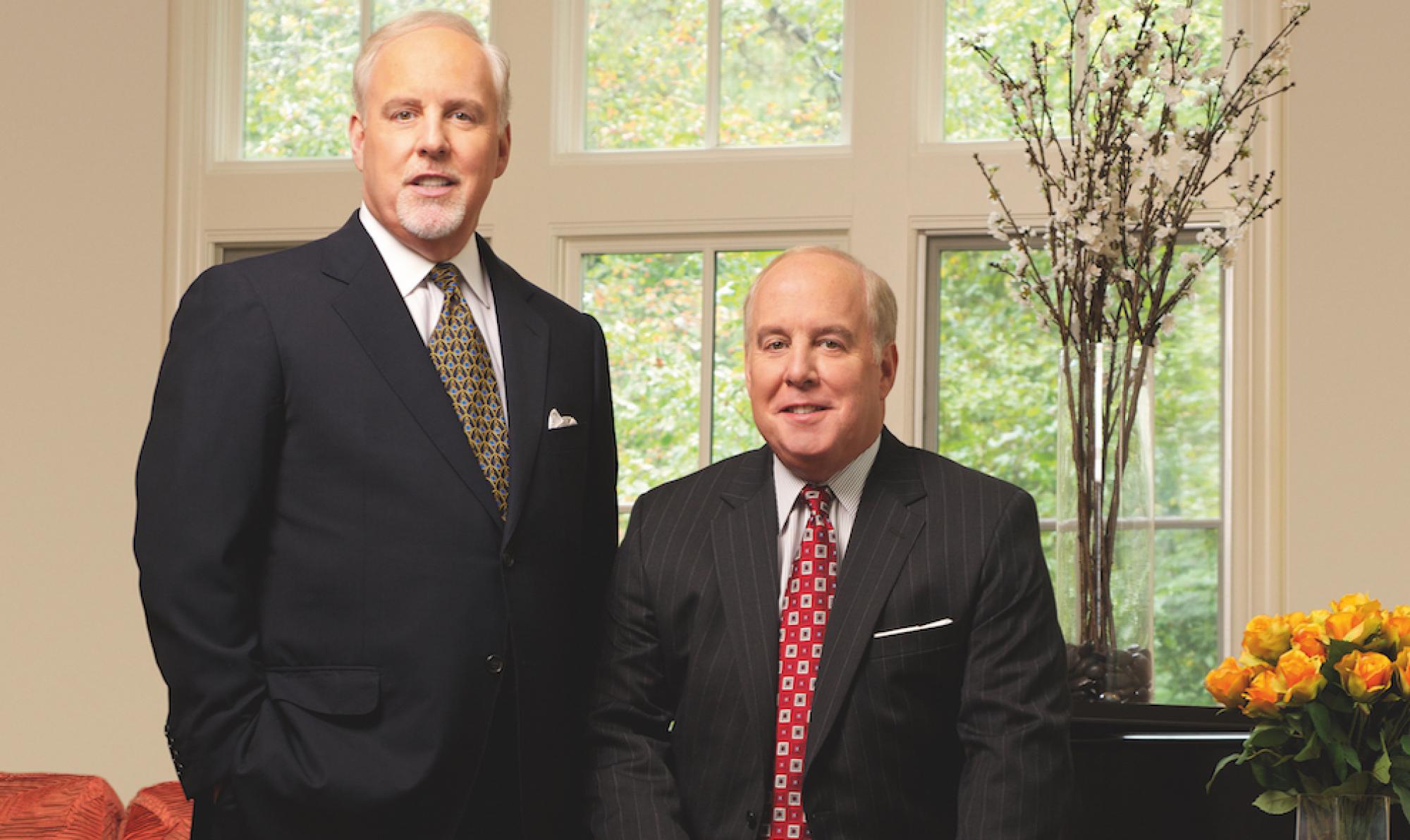 “Tom and I were deeply moved by the in-field work of the 2013 Nobel Peace Prize winner—the Organization for the Prohibition of Chemical Weapons—and by the remarks of the team leader who referenced his colleagues’ work in Syria,” Tim says. “We learned that individuals can indeed make a difference in the world. But we also came to believe that individual efforts could be even more impactful through a fact-driven, metric-based, analytical approach.”

This experience, and others like it with previous Nobel Peace Prize laureates, helped crystallize another belief that the Pearson brothers came to hold: that mitigating violent global conflicts is the single most important challenge, responsibility and public policy issue of our time.

This passionate belief is the driving force behind The Pearson Institute for the Study and Resolution of Global Conflicts and The Pearson Global Forum. This new initiative, created in late 2015 through a landmark $100 million gift by The Thomas L. Pearson and The Pearson Family Members Foundation, places the University of Chicago and the Harris School of Public Policy at the forefront of global conflict resolution.

The four Pearson brothers—Tim, Tom, Philip and David—are no strangers to serious discussion and social engagement. “Growing up in Iowa, family dinners were a time to explore new ideas,” Tom recalls. “Our parents were educated professionals, and they would expect us to bring ideas and interests to the table. We were also exposed to the ideas of influential political leaders, missionaries, scholars and writers who joined our family over Sunday dinners. I can still recall the especially emotional conversation we had about theology in our home with future Nobel Peace Prize laureate Desmond Tutu.”

While these early experiences broadened their perspective on the world, the strong guidance of their parents infused the values and drive to lead productive and committed lives. Their father, the Rev. Dr. Richard L. Pearson, was a prominent Methodist minister deeply committed to equal rights and social justice. “In the summer of 1965, he marched in Selma, Alabama, with Dr. Martin Luther King Jr. and participated in voter registration drives across the deep South,” Tim recalls. “Fourteen years later, at the invitation of President Carter in recognition of his social justice interests, he was invited to the White House for a briefing on disarmament talks with the Soviet Union.”

Their mother, Ramalee E. Pearson, grew up as a Methodist minister’s daughter to become a committed homemaker and college professor of religion and theater. She also made time for food drives, soup kitchens and other volunteer activities with members of her church. Active in community theater, Ramalee once played the leading role in Mame—a slightly risqué role for a minister’s wife in the 1970s. As Tom recalls, “She taught us by example the value of hard work, the responsibility to help others and an especially enduring lesson: that a good life is an engaged life.”

Together, Richard and Ramalee Pearson raised four sons, all of whom value personal accomplishment and social responsibility. Philip was a high school athlete who won academic scholarships for college and studied abroad at the University of Aberdeen. David continues his lifelong affiliation with the Methodist church by serving as a local leader at a church in downtown Chicago and as a social rights advocate. Tom and Tim earned Eagle Scout status by the eighth grade and both won scholarships and academic awards while working their way through college. All four brothers still strive to lead the meaningful, positive, contributory lives their parents modeled for them.

“In his sermons, our father often invoked the well-known Biblical passage ‘To whom much is given, much is required,’” Tom recalls. “That’s become very much a filament in the fabric of our lives—the drive to make the most of our talents and gifts— and to do good works.”

“The Pearson family is very aware of the impact every one of us can make if we choose to do so in our community,” says Kathryn Hall, the former U.S. ambassador to Austria. “The brothers were raised in a family committed to humanity, where service is part of who they are.”

As the brothers grew up, Tom and Tim chose professional careers that ultimately prepared them to lead the family’s philanthropic mission. An accomplished attorney and executive, Tom spent most of his career in the energy sector, serving as senior vice president, general counsel and corporate secretary of Alliance Resource Partners, L.P. and Alliance Holdings GP, L.P.—two publicly traded master limited partnerships. Previously, he co-led the leveraged buyouts that culminated in the two public stock offerings for the Tulsa-based energy firm, which is the third-largest coal mining company in the Eastern United States.

Today, Tom serves as chairman of The Thomas L. Pearson and The Pearson Family Members Foundation, whose gift to the University established The Pearson Institute and The Pearson Global Forum. He also sits on the Executive Council of Cohesive Capital Partners, where he advises partners of the New York City-based private equity firm on global and regional economic, political and industry matters.

Tim took his liberal arts education in an altogether different direction. He served as the first-ever chief marketing officer at global professional services firm KPMG. As a vice chairman and global managing partner, he also served on the U.S. management committee and the international executive team. Tim is now president and CEO of The Thomas L. Pearson and The Pearson Family Members Foundation. He also advises and counsels senior management teams and boards of Fortune 1000 companies on business and brand strategy through his own Atlanta-based consultancy, Pearson Advisors || Partners. In 2011 McGraw Hill published his New York Times best seller The Old Rules of Marketing Are Dead, which explains how brands must evolve to stay relevant in today’s Internet-dominated world.

Tom and Tim have supported many charitable organizations over the years. But when their parents passed, they began to discuss what each desired the Pearson family’s legacy to be after their own passing. Conversations at a family home in the Utah mountains and discussions with brothers Philip and David quickly coalesced. The Pearson family would help make the world a less violent place by supporting research aimed at reducing global conflicts, and by applying research conclusions to inform related public policy.

“No single issue is more important today than the study of the intersection of war, failed states, terrorism and economic cataclysms—and more importantly, the response that the design of policies directed toward forming a more peaceful world will have,” Tom says. “Today, 59.5 million people are refugees, displaced or seeking asylum. The time to act is now.”

The Pearsons also talked at length about philanthropy—and arrived at an approach that was true to their values. “We surveyed the current landscape and looked for a model that would provide a return on our philanthropic investment,” Tom says. “The strategic approach we adopted is driven by a clear mission with goals and objectives, strong institutional partnership, active involvement, executional rigor, an ‘asset-light’ structure and accountability.”

In 2011 the brothers established The Thomas L. Pearson and The Pearson Family Members Foundation and began to search in earnest for the right academic institution and partner to carry their vision forward.

“We evaluated a number of leading U.S. universities, but quickly became convinced that the University of Chicago would be the best partner,” Tim says. “The University has committed leadership. It has an existing entity, the Harris School of Public Policy, where The Pearson Institute can reside and undertake new forms of interdisciplinary and data-driven research. It has global reach through its collaborative University Centers in Paris, Beijing, Delhi and Hong Kong. And from its inception, the University has fostered an environment in which rigorous inquiry is successfully applied to society’s toughest problems.”

The Pearson Institute and The Pearson Global Forum will be the first of their kind devoted solely to the study and resolution of global conflicts. They will confront today’s new era of violent conflicts by filling a critical gap in identifying new strategies—rooted in innovative and data-driven research approaches—that will act as a driving force in transforming how we understand and approach global conflicts.

“When I heard about the Pearsons’ gift to the University of Chicago, I was blown away,” said Bill George, senior fellow at Harvard Business School, former chairman and CEO of Medtronic, and the best-selling author ofAuthentic Leadership: Rediscovering the Secrets to Creating Lasting Value and Discovering Your True North. “I had no idea that they were talking about a gift of this magnitude or something that would have this enormous impact. If we can just avoid one armed conflict through the work at The Pearson Institute, that’s going to be a great gift to humanity.”

“We base our optimism about The Pearson Institute’s future on one very simple belief: If we change one life, we’ve been successful,” Tim says. “If we change millions of people’s lives by our ability to inform public policy, we believe there’s no greater legacy the Pearson family can leave for the world.”