About Michael A. Nutter

After serving almost 15 years in the Philadelphia City Council, Michael A. Nutter was elected the 98th Mayor of his hometown in November 2007 and took office in January 2008.  At his inaugural address, Mayor Nutter pledged to lower crime, improve educational attainment rates, make Philadelphia the greenest city in America and attract new businesses and residents to the city.  He also promised to lead an ethical and transparent government focused on providing high quality, efficient and effective customer service.

With the support of an experienced, professional staff, Mayor Nutter made significant progress on every pledge: homicides were at an almost 50 year low at the end of his tenure; high school graduation and college degree attainment rates increased significantly; Philadelphia added hundreds of miles in bike lanes and trails and launched the first low-income friendly bike share system in America, called Indego; and Philadelphia’s population grew every year since 2008, including the largest percentage of millennial population growth in the nation.  He actively recruited businesses to set up shop in Philadelphia, both domestically and internationally with tax reforms, better business services and international trade missions.  And, despite the damaging impact of the Great Recession, Philadelphia’s economy demonstrated significant growth – since January 2014, more than $11.5 billion of economic development projects have been completed, are under construction or announced.

Mayor Nutter made a commitment to strong financial stewardship, vigorously managing the City through the worst economic recession since the Great Depression.  As a result, Philadelphia’s credit rating was upgraded to the “A” category by the three major credit rating agencies for the first time since the 1970s.

In 2013, Philadelphia City Council passed his Actual Value Initiative, the City’s first ever property assessment system overhaul, transforming a broken and corrupt system into a fair, accurate and understandable system.

In affiliation with the National League of Cities, Mayor Nutter and New Orleans Mayor Mitch Landrieu launched Cities United, an initiative aimed at creating partnerships between cities, non-profits, and other stake holders to combat violence and crime among African-American men and boys.  He also serves on President Obama’s My Brother’s Keeper Advisory Council.

In June 2013, Mayor Nutter concluded his tenure as President of the United States Conference of Mayors, which is the official non-partisan organization of almost 1,300 U.S. cities with populations of 30,000 or more. As President, Mayor Nutter represented the Conference by strengthening federal-city relationships and promoting the development of effective national urban policy.  In June 2015, Mayor Nutter completed his year of service as President of the Pennsylvania Municipal League, which brings together municipal government officials from across the Commonwealth to advance policy initiatives state-wide.

In 2011, Esquire magazine named Mayor Nutter to its Americans of the Year list and in 2014, he was named Public Official of the Year by Governing magazine.  During his tenure, Philadelphia City government received more than 150 awards for innovative programs, good government practices and excellence.

In January, the Department of Homeland Security announced that Mayor Nutter accepted an appointment to the Homeland Security Advisory Council. Also in January, Columbia University/SIPA announced his appointment as a Professor, and in March, the Board of Trustees voted to appoint him as the Inaugural David N. Dinkins Professor of Professional Practice in Urban and Public Policy. In February, CNN news media organization announced that Mayor Nutter became a political commentator for the network. Also in February, Bloomberg Philanthropies announced his appointment as a Senior Fellow and national spokesperson for the What Works Cities program, working with Mayors all across the United States. In April, Drexel University announced that Mayor Nutter joined the Lebow College of Business as an Executive Fellow in Leadership, working with the Institute for Strategic Leadership (ISL).

In July, Airbnb announced that Mayor Nutter will chair their first ever Mayor’s Advisory Council, an international group of former Mayors providing strategic advice on local government issues and public policy. In August, the University of Chicago Urban Labs announced that Mayor Nutter had been appointed to the position of Executive Fellow, the Federal Reserve Bank of Philadelphia announced his appointment as a Member of the Economic and Community Advisory Council and the Chicago Council on Global Affairs announced his appointment as a Distinguished Fellow. In November, The Brookings Institution announced that Mayor Nutter had been appointed as a Distinguished Non-Resident Senior Fellow in the Metropolitan Policy Program. In December, Code for America announced that Mayor Nutter became a Board member. On January 3, 2017, Mayor Nutter became an Independent Director and Board member of the new publicly traded company, Conduent Corporation, the spin-off firm from Xerox Corporation. Mayor Nutter maintains active involvement in critical areas of education, media, public policy, political campaigns, the corporate community, and academic institutions across the country. He is active in the social media environment, and can be reached on Twitter @Michael_Nutter, or through his website WWW.MikeNutterLLC.com.

Mayor Nutter is a life-long Philadelphian, born and raised in West Philadelphia and educated at the Wharton School at the University of Pennsylvania.  He has been dedicated to public service since his youth.  Mayor Nutter is happily married to his wife Lisa, and. a proud parent to Christian and Olivia. 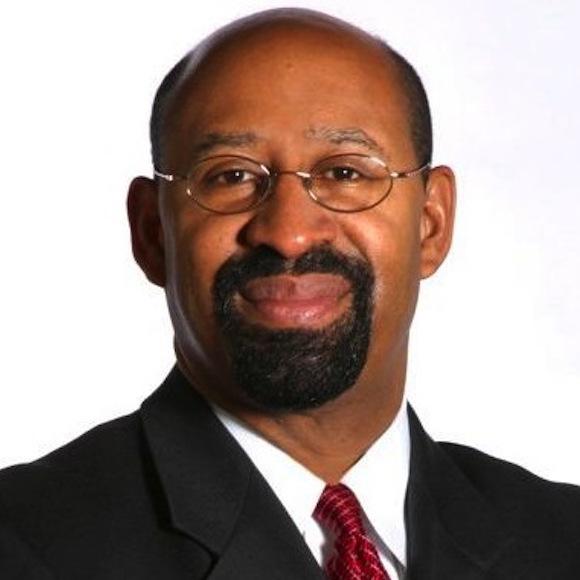