Katherine Baicker, a leading scholar in the economic analysis of health care policy, officially joined Harris Public Policy on August 15, 2017 as the school's dean.
Back to Leadership

Katherine Baicker, a leading scholar in the economic analysis of health care policy, commenced as Dean and the Emmett Dedmon Professor at the University of Chicago Harris School of Public Policy on August 15, 2017.

Baicker’s research focuses primarily on the factors that drive the distribution, generosity, and effectiveness of public and private health insurance, with a particular focus on health insurance finance and the effect of reforms on the distribution and quality of care.  She is currently one of the leaders of a research program investigating the many effects of expanding health insurance coverage in the context of a randomized Medicaid expansion in Oregon. Her research has been published in journals such as the New England Journal of Medicine, Science, Health Affairs, and the Quarterly Journal of Economics.

Before coming to the University of Chicago, Baicker was the C. Boyden Gray Professor of Health Economics in the Department of Health Policy and Management at the Harvard T.H. Chan School of Public Health. She holds appointments as a research associate at the National Bureau of Economic Research; as an affiliate of the Abdul Latif Poverty Action Lab; and serves on the Congressional Budget Office’s Panel of Health Advisers; on the Board of Directors of Eli Lilly; and on the editorial boards of Health Affairs and the Journal of Health Economics. Baicker is an elected member of the National Academy of Medicine (IOM) and the National Academy of Social Insurance.

Baicker has been a member of the faculty of the Department of Public Policy in the School of Public Affairs at the University of California, Los Angeles; the Economics Department at Dartmouth College; and the Center for the Evaluative Clinical Sciences and the Department of Community and Family Medicine at Dartmouth Medical School. She has served as Chair of the Massachusetts Group Insurance Commission; Chair of the Board of Directors of AcademyHealth; Commissioner on the Medicare Payment Advisory Commission and a nonresident senior fellow of the Brookings Institution. From 2005-2007, she served as a Senate-confirmed Member of the President’s Council of Economic Advisers, where she played a leading role in the development of health policy. Baicker earned her B.A. in economics from Yale and her Ph.D. in economics from Harvard. 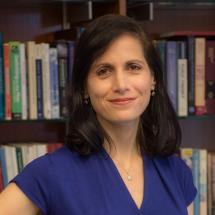 Fifteen faculty members at the University of Chicago, including Harris Public Policy Dean Katherine Baicker, have been elected to the American Academy of Arts and Sciences, one of the nation’s most prestigious honorary societies.
Read more
Faculty profile

Dean Baicker: The Power of the Analytical Toolkit

Dean Baicker: How I Became a Health Economist

News
Election Cyber Surge will develop a database of technologists willing to volunteer their time to advise state and local election officials and administrators on various cybersecurity issues.

Student profile
“I’ve never been in a place where you can feel such optimism, where you’re surrounded by people who not only want to change the world, but are actually trying to do it.”

News
Professor Christopher Berry and Associate Professor Anthony Fowler developed a new course, Government Responses to COVID-19, as a guided research project for students after the pandemic upended their plans to teach in Barcelona.